This demo shows the steps of Shor’s Algorithm.

The complex coefficients of each classical state are represented as a coloured bar.  The colour represents the phase, using the usual domain colouring standard as in the picture below (red = positive real direction, greeny-yellow = positive imaginary direction).  The height represents the complex absolute value. 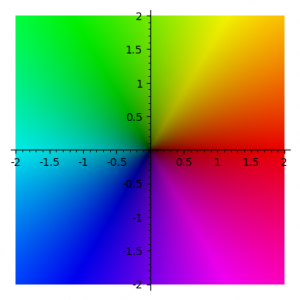 Pressing C/c advances/retreats the steps of the algorithm.  Recall that the goal of the algorithm is to find the period of the function $x \mapsto a^x \pmod N$, which can (classically) be turned into a factorization of $N$.

Once at Step 3, you can look at the QFT below to see the resulting quantum state.  This is the state you wish to measure to obtain the periodicity of $a^x \pmod N$.